Black Lives Matter activists at the University of Indiana-Bloomington blocked traffic and would not let motorists through, even to the point that they banged on the hoods and doors of the cars trying to get through:

According to The Herald-Times, the demonstration by the Black Student Union (BSU) and Students Against State Violence (SASV) student groups was held in response to the Bloomington Police Department’s investigation into the death of Joseph Smedley, a 20 year-old former IU student who went missing in October 2015, and whose body was later found nearby at Griffy Lake…

…Multiple attempts by vehicles to drive around the demonstrators via alternate routes were met with angry demonstrators blocking their cars, yelling at the motorists, and even banging on the hoods and doors of their vehicles.

One frustrated driver sought to drive slowly through the crowd of protesters, apparently hoping they would clear a path, but the students merely banged on and shattered a portion of his windshield. 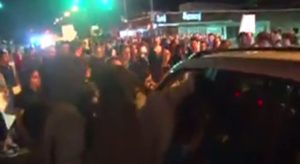