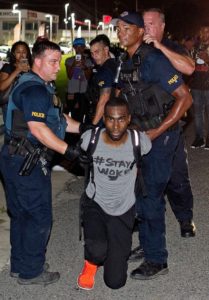 DeRay McKesson, organizer, activist and educator has received attention unheard of for an activist. Having advocated for issues relating to children, youth and families for 15 years, Mckesson rose to fame after leaving his job to move to Missouri and protest after the death of Mike Brown. Ferguson was the first city Mckesson had physically protested in, because of the rise of social media activism.

In an interview in NY Magazine, Mckesson explained that it was in Ferguson that he realized that “protest is also community-building, literally bringing together people to form new communities of power.” During his time with the Black Lives Matter protesters, Mckesson co-founded the Protestor Newsletter and Campaign Zero, all a subcategory under the wetheprotesters.org website. The sites speak against police brutality and include chants and sign suggestions for protests as well as other ways to “stay woke.”

Mckesson began his career as an organizer in Baltimore as a teen, he graduated with a degree in government and legal studies before going on to work for Teach for America in New York City. After switching to activism almost full-time, he started a controversy when he attempted to run for mayor of Baltimore, with many claiming he didn’t spend enough time in the city to be the mayor. The Black Lives Matter organization also did not endorse him, despite his efforts made in their behalf.

Due to his work with Black Lives Matter, Mckesson was named one of Fortune Magazine’s 50 greatest world leaders in 2015. He has also had the opportunity to speak at Yale, a GLADD banquet, and with Bernie Sanders and Hillary Clinton. He reminded his almost 500,000 followers on Twitter that the candidate will need a strong connection to black people in order to be successful, among his other numerous Tweets that state things such as “1 day ago, just last night, we saw the police abuse their power and intentionally provoke protestors in order to create and exploit conflict.” In between the “I love my blackness. And yours.” Mckesson posts videos of he and the other protesters in various places.

Most recently, after being named Chief Human Capital Officer of the Baltimore City Public School System in June, he joined protesters in Baton Rouge in the aftermath of the shooting of Alton Sterling. Following the suit of the other nation-wide protests, the crowd supposedly blocked roads and major highways. Mckesson was arrested for “obstruction of a roadway” although his live-streamed video showed him being singled out and arrested. Despite this setback, Mckesson was interviewed upon his release by many news sources and stated that he will keep fighting and speaking the truth, no matter what.